The Resurgence of Non-Traded REITs

Non-traded REITs were introduced in the 1990s as an alternative investment strategy. Advisors could offer this investment type to clients interested in owning Private Real Estate, but perhaps lacked the information or capital to do so. The NTR offered the possibility of stronger returns than public REITS, which many believed came at the price of a liquidity premium. NTRs were also not subject to the same market volatility as public REITs—another point supporting investment into NTRs.

NTRs gained traction among broker-dealers in 2010, nearly growing into a $20 billion market a few years later. 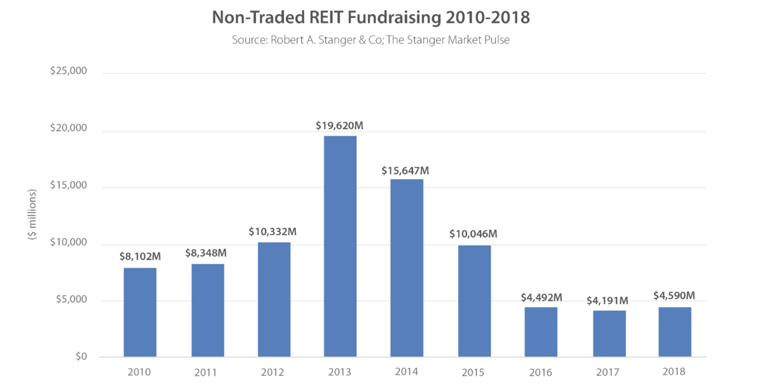 A Fall From Grace

NTRs had been on the radar of regulators for years. When the Department of Labor issued its Fiduciary Rule in 2015, NTRs were initially not allowed to be placed as an asset class in retirement accounts. The Department of Labor’s action raised concern among many brokers who had been using NTRs as an alternative source of income for yield-hungry retirees.

And negative publicity snowballed. The SEC issued an investor bulletin the same year cautioning investors about the investment risks of Non-traded REITs. Ultimately, the final Fiduciary Rule didn’t exclude any asset classes from use in retirement accounts, but by that time, advisors were already using other investments to meet their clients’ needs.

Quickly responding to the industry's headwinds, many sponsors went to work on redesigning the Non-traded REIT structure. Soon, new products were introduced that overcame many investors’ lingering objections. New NTRs now include several features similar to publicly-traded securities, including:

This new wave of product innovation and an alignment of interests between sponsors, advisors, and their clients, has sparked a resurgence of investment activity in the NTR sector. In reality, the potential benefits of owning Private Real Estate in a well-diversified portfolio never waned, advisors just needed sponsors to build more investment-friendly products—which they did.

Today’s NTR sector of the Private Real Estate industry is marked by explosive growth. According to investment banking firm Robert Stanger and Co, which tracks Non-traded REIT industry performance, fundraising for NAV REITs topped $12.2 billion during the first quarter of this year. Stanger predicts total fundraising of $45 billion for 2022.

The performance of the Non-traded REIT market has been impressive compared to public REITs, illustrating Private Real Estate has the potential to provide strong returns over extended periods of high market volatility.  According to Stanger,

“Non-traded NAV REIT returns outpaced those of their traded counterparts with a cumulative total return of 70.1 percent over the last 60 months. The total return of this MSCI US REIT Index (a measure of performance of publicly-traded REITs index) was 58.5 percent.” - ccim.com

Stanger also points out during this year’s first-quarter market volatility, NAV REITs posted a 4.94% return while the MSCI US REIT Index fell 4.04%.

We would be honored to introduce you to the new design features of Non-traded REITs and help you explore the benefits of Private Real Estate investing. You can conveniently schedule a one-on-one meeting with me HERE.

The contents of this communication: (i) do not constitute an offer of securities or a solicitation of an offer to buy securities, (ii) offers can be made only by the confidential Private Placement Memorandum (the “PPM”) which is available upon request, (iii) do not and cannot replace the PPM and is qualified in its entirety by the PPM, and (iv) may not be relied upon in making an investment decision related to any investment offering by the issuer, or any affiliate, or partner thereof ("Issuer"). All potential investors must read the PPM and no person may invest without acknowledging receipt and complete review of the PPM. With respect to any “targeted” goals and performance levels outlined herein, these do not constitute a promise of performance, nor is there any assurance that the investment objectives of any program will be attained. All investments carry the risk of loss of some or all of the principal invested. These “targeted” factors are based upon reasonable assumptions more fully outlined in the Offering Documents/ PPM for the respective offering. Consult the PPM for investment conditions, risk factors, minimum requirements, fees and expenses and other pertinent information with respect to any investment. These investment opportunities have not been registered under the Securities Act of 1933 and are being offered pursuant to an exemption therefrom and from applicable state securities laws. All offerings are intended only for accredited investors unless otherwise specified. Past performance are no guarantee of future results. All information is subject to change. You should always consult a tax professional prior to investing. Investment offerings and investment decisions may only be made on the basis of a confidential private placement memorandum issued by Issuer, or one of its partner/issuers. Issuer does not warrant the accuracy or completeness of the information contained herein. Thank you for your cooperation.

• There is no guarantee that any strategy will be successful or achieve investment objectives including, among other things, profits, distributions, tax benefits, exit strategy, etc.;
• Potential for property value loss – All real estate investments have the potential to lose value during the life of the investments;
• Change of tax status – The income stream and depreciation schedule for any investment property may affect the property owner’s income bracket and/or tax status. An unfavorable tax ruling may cancel deferral of capital gains and result in immediate tax liabilities;
• Potential for foreclosure – All financed real estate investments have potential for foreclosure;
• Illiquidity – These assets are commonly offered through private placement offerings and are illiquid securities. There is no secondary market for these investments.
•Reduction or Elimination of Monthly Cash Flow Distributions – Like any investment in real estate, if a property unexpectedly loses tenants or sustains substantial damage, there is potential for suspension of cash flow distributions;
• Impact of fees/expenses – Costs associated with the transaction may impact investors’ returns and may outweigh the tax benefits
• Stated tax benefits – Any stated tax benefits are not guaranteed and are subject to changes in the tax code. Speak to your tax professional prior to investing.